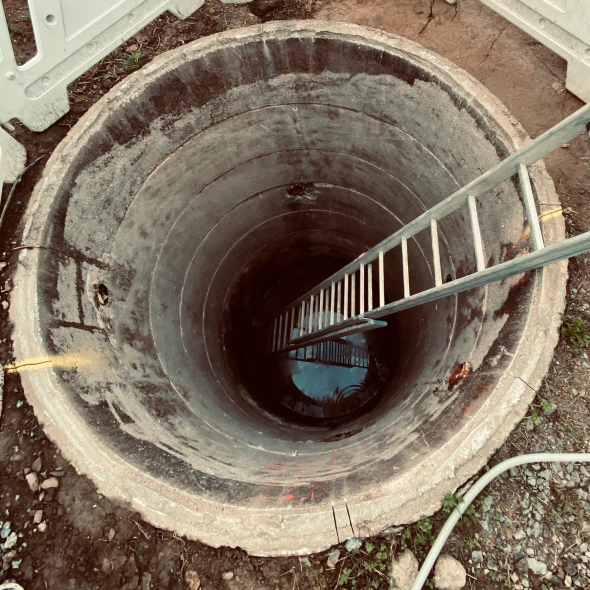 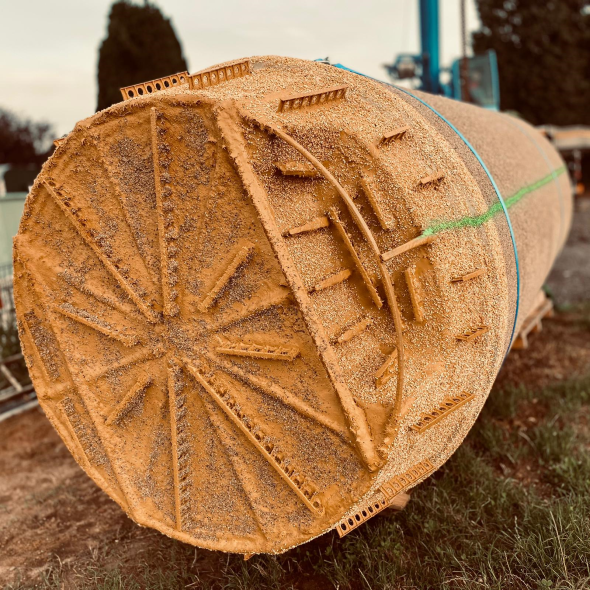 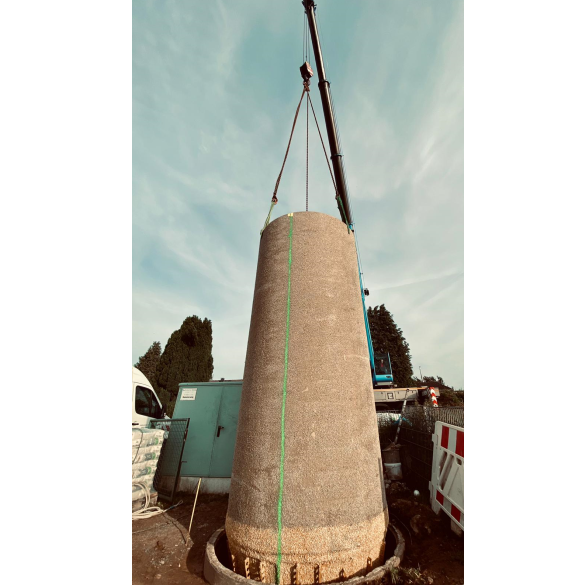 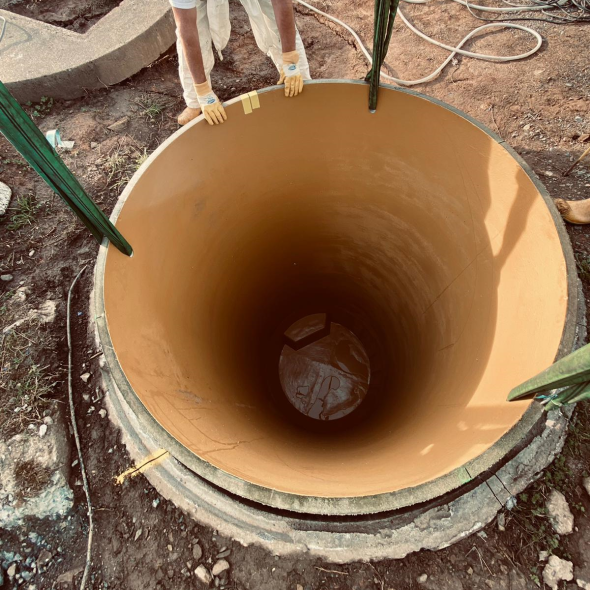 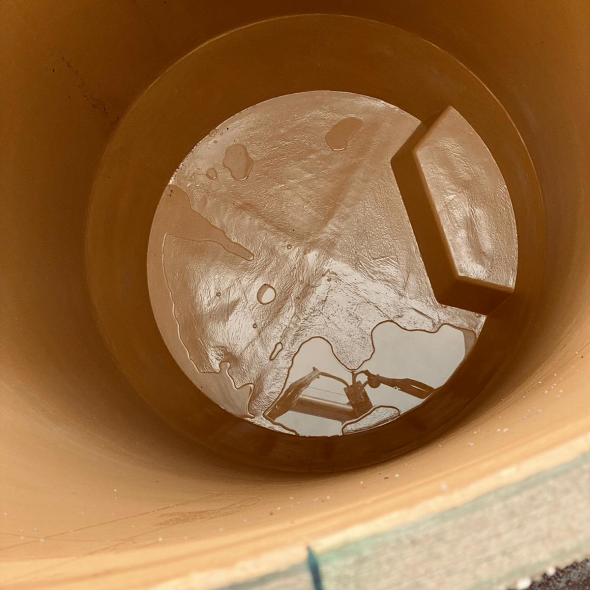 The aim of the Burscheid construction project was the renovation of a pumping station from DN 2000 to DN 1800 for TWB – “Technischen Werke Burscheid” (Technical Works of the city of Burscheid/ Germany). The old pumping station was renovated as a result of concrete corrosion and leaks. The construction work to be carried out for this project was carefully worked out and precisely planned by our field service in cooperation with the client.

Two sewage pumps and an agitator were installed in the pumping station. A special benching was designed and built for the agitator (mixed fats), whereby the lower part was reinforced with steel in the GRP. The cover slab supplied for this site was also lined with GRP. The sewer structures were successfully installed thanks to good cooperation with the sewer renovation company. 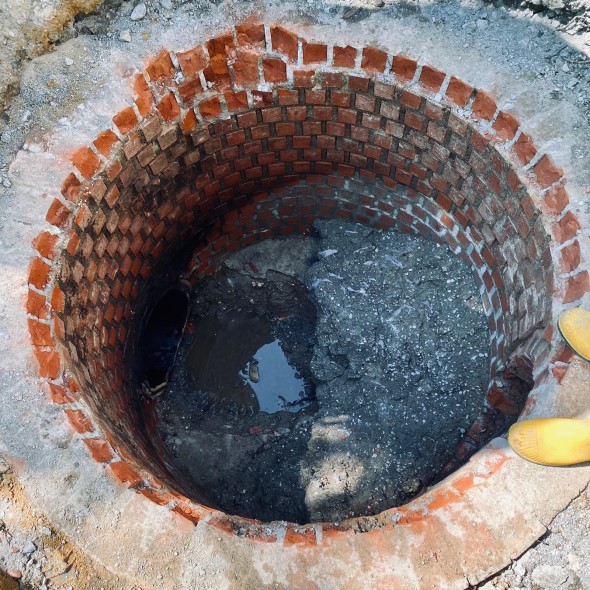 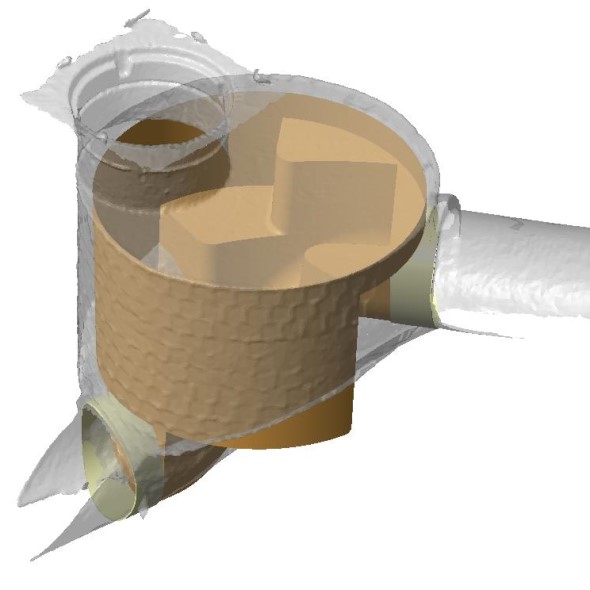 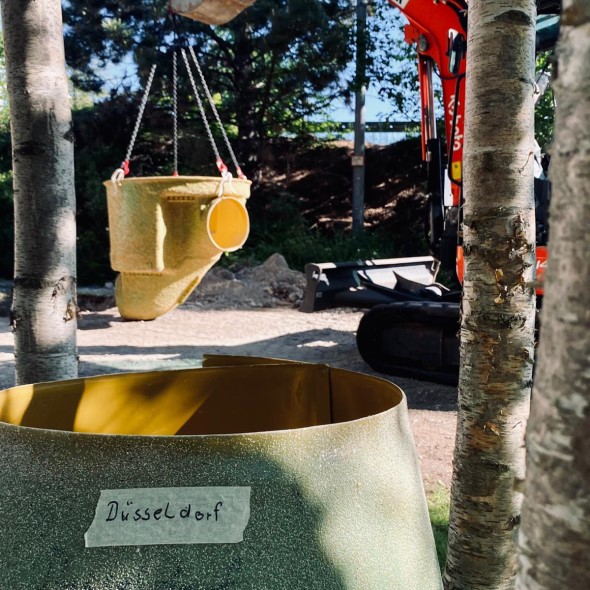 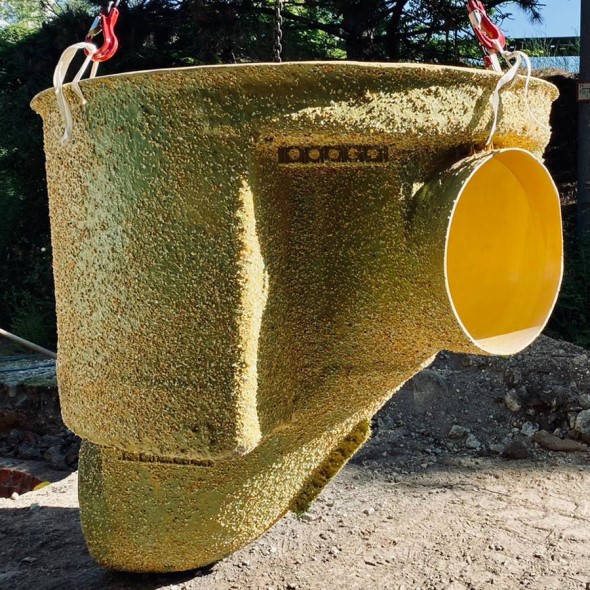 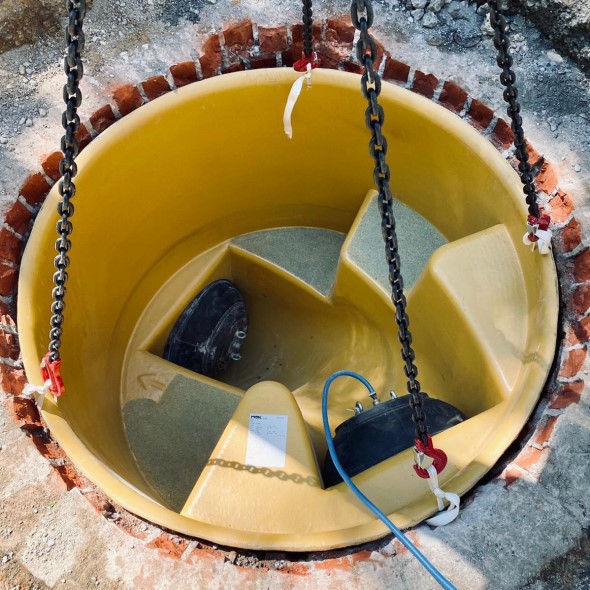 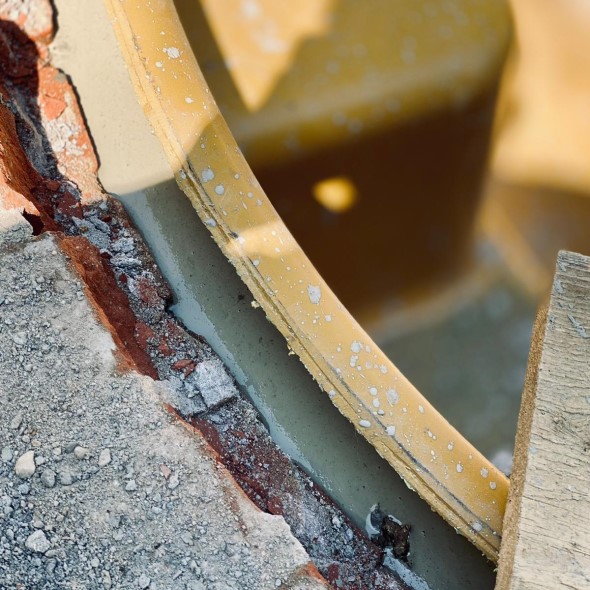 As part of the rehabilitation project at the Düsseldorf Airport, the already pictured manhole S97 got rehabilitated using the manhole-in-manhole process.

The originally existing concrete channel was due to the steep slope in the manhole base and thus almost disintegrated. The channel was removed and flushed out by the strongly flowing wastewater.

The task was to produce a rehabilitation manhole-base for DN1500 and install it on site as quickly as possible, as water conservation proved to be extremely difficult due to the quantities received.

The sewer rehabilitation company has rehabilitated the manhole with our manhole-in-manhole system under the guidance of our outdoor staff Mr. Hornung.

The rehabilitation manhole-base is made out of GRP with upstand and the concrete cover plate is fully lined with GRP.

This is how the rehabilitation work was carried out:

1. Remove the cover and the old concrete cover slab DN 1500

2. Chisel out the old channel and the rest of the benching

3. Insertion and positioning of the GRP – rehabilitation base by means of shut-off bladders

4. Pouring out the annular space under the benching and the channel with grout from P&T Topolit Super Fix

5. Curing for about an hour

6. Putting on the cover slab and the ductile iron access cover 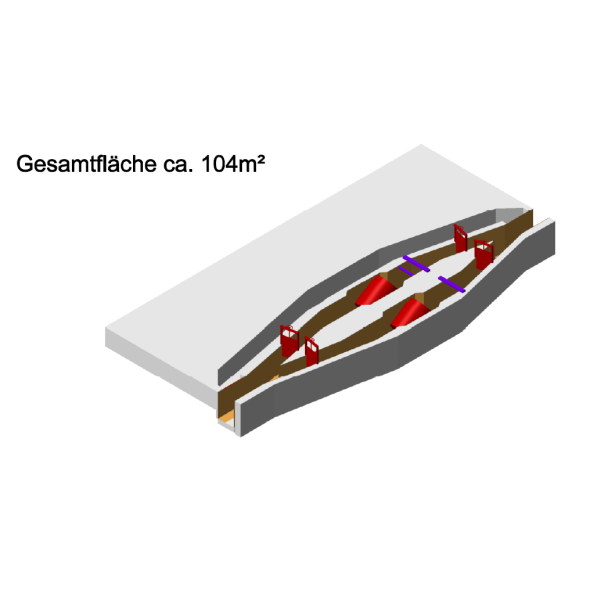 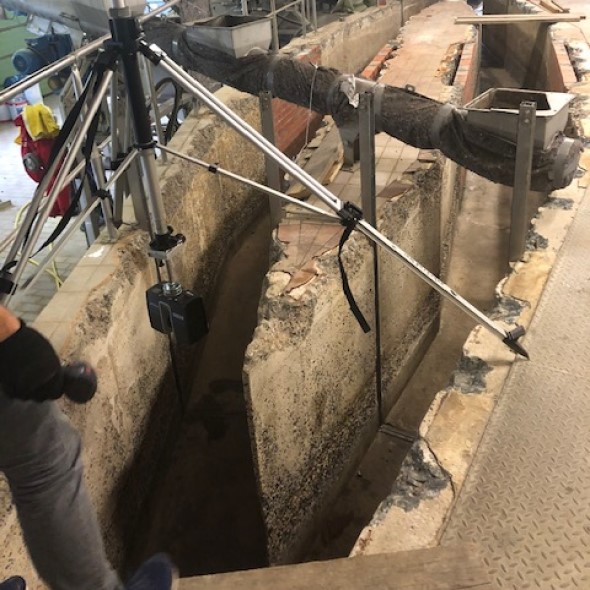 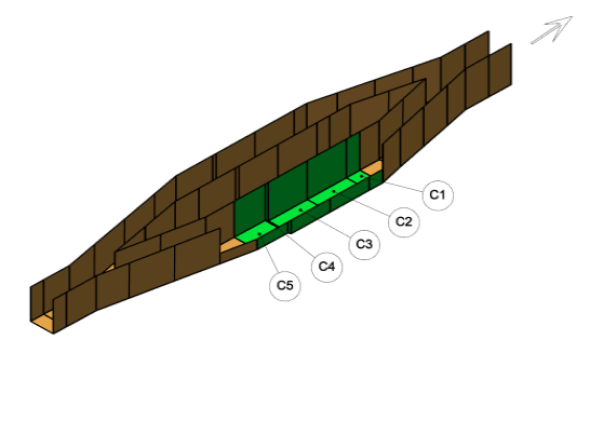 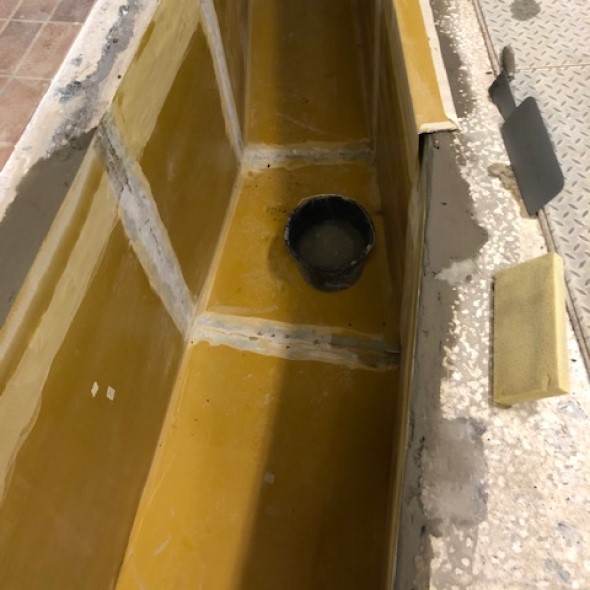 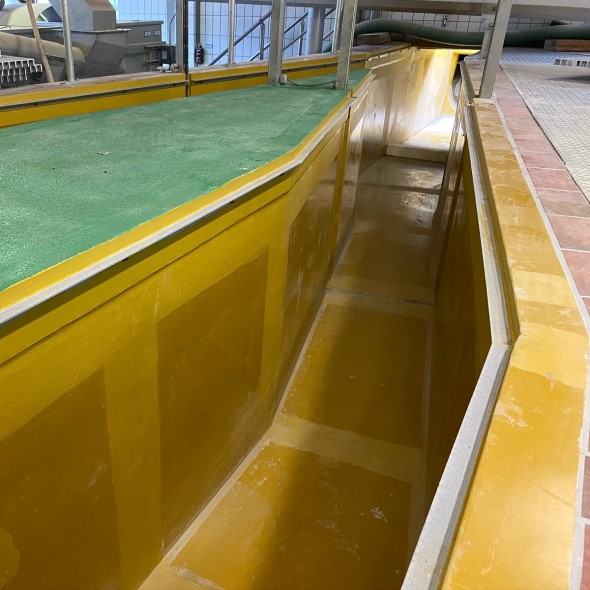 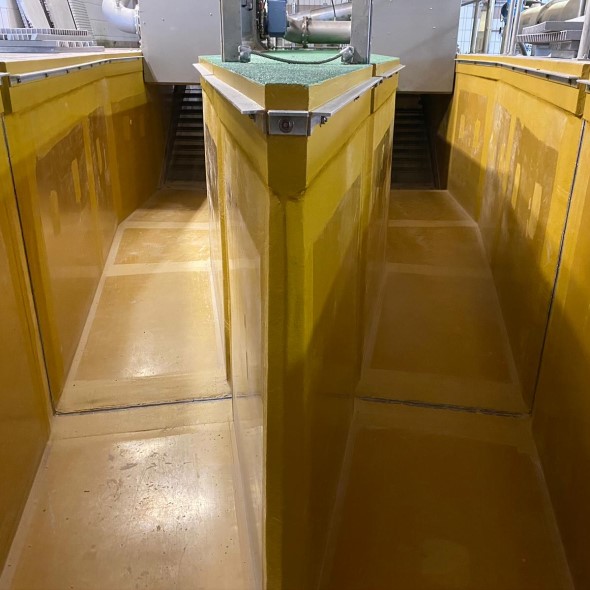